Hue, pronounced ”H-way”, seems to have a micro climate of its own. Prior to our visit we  watched an Anthony Bourdain documentary on Hue which noted the vast number of rainy days this city receives per year. We visited late January during the dry season and the weather was cool with light rain drizzle each day; vastly different to the blue sunny skies of Hoi An (where we had just come from). So if Hue is on your travel list then make sure you expect this type of weather, pack the right type of clothing, and carry an umbrella with you.

Hue is enriched in history! The city was founded as the imperial capital of Vietnam in 1802, and therefore key sights include the imperial citadel, royal palace, intricately decorated gates, temples and tombs.

Imperial Citadel: This sprawling complex was where the Imperial Emperors lived and conducted all their business. The citadel contains a section known as “The Forbidden Purple City,” which (much like China’s Forbidden City) was reserved for only the elite in Vietnam. The citadel is quite run down now, but you are free to explore the grounds at your leisure, giving you time to imagine its former grandeur. Allow a good few hours to explore, and make sure you bring your camera to capture the well worn beauty of the site. 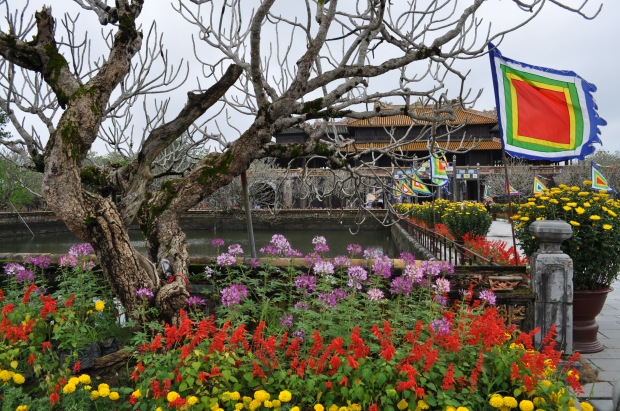 We tried to learn about the history of Hue by reading up our various guide books, however in retrospect we really should have done a walking tour of the site to understand more about the history and the various sections of the citadel.

Its all in the detail: the gate of the old city walls.

Dong Ba Market: A maze of alleyways and stalls to get lost in; this is a huge market selling just about anything and everything.  We visited for lunch time hoping to grab some delicious local cuisine… but sadly found a large portion of the food stalls closed for  the TET holiday.

Royal Tombs: South of Hue old town there are many Royal tombs and pagodas scattered along the banks of the Perfume River, forming resting places for the past rulers of the Nguyen dynasty. There are too many to see in the one day, so I would recommend selecting only 2 or 3 to visit and taking your time exploring each. 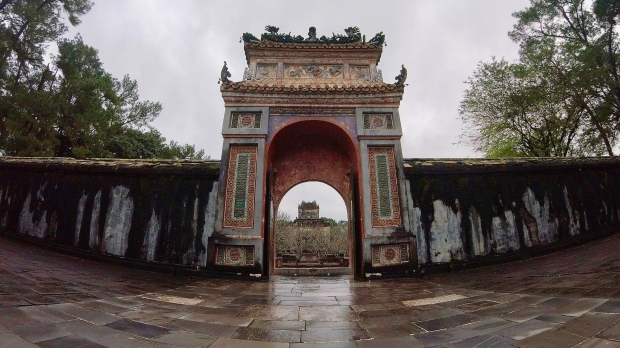 We stayed on the outskirts of Hue at the beautiful Pilgrimage Village. Set amongst lush greenery, the resort is a quiet escape from the hustle and bustle of the city. With a free scheduled shuttle bus, the resort is an easy 10 minute drive from the centre of the city. Should you want some time out from sightseeing, the resort has plenty to keep you entertained: billiards table, yoga and tai chi classes, as well as relaxing by the stunning pool (assuming you get warmer weather than we did!).

The hotel has a really great restaurant on the grounds where you can sample some of the local delicacies such as Bun Bo Hue (the regions’ signature dish of round rice noodles in a beef broth), Pho Khan (dry noodles with salad and spring rolls), and Ban Khoai (crunchy rice flour crepe). 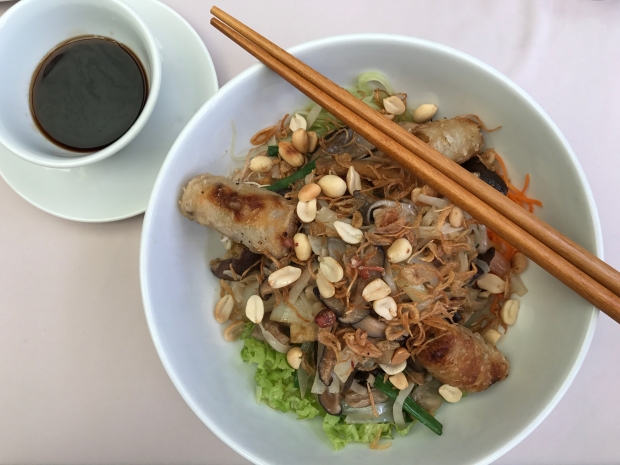 We travelled to Hue from Hoi An via the local train, which was a journey I would HIGHLY recommend. The route from Danang to Hue is famed as the most picturesque leg of the entire railway line running from north to south of Vietnam. The train journey is just under 3 hours, and hugs the rugged Vietnam coastline. We travelled as a group of 4 and decided to splurge on a first class sleeper cabin (the splurge being about $12.50 Singapore dollars per passenger!), and lucked out getting the berth to ourselves. This meant we had uninterrupted views out of the window for the duration of the journey…. and the views lived up to the hype! 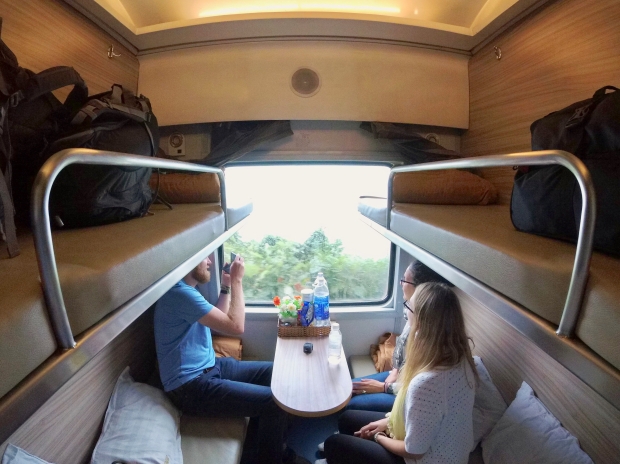 We booked our tickets online in advance (seats sell out during the TET holiday week so best to secure tickets as early as possible) but outside of this holiday, you can grab tickets at the train station ticket booth in Danang.